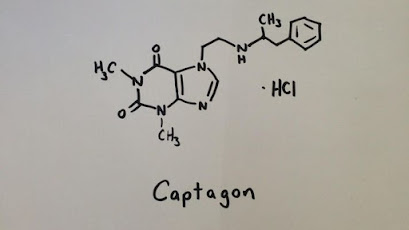 Long story short, I was discussing the subject matter of my book (Fear and Fight: A New and Better Understanding of Our Natural and Learned Responses to a Threat) with a friend who served with the Australian Defence Force (ADF) in Afghanistan and referred to Colonel John M. House's, 'Soldiers must overcome their fear of death and injury in order to act and survive on the battlefield' (Why War? Why an Army? 2008). I said that this applies to equally to ADF personnel and  the Taliban militants they were fighting in Afghanistan. The ostensible explanation for how ADF personnel overcome their fear of death and injury on the battlefield is though courage, however, how do the Taliban militants do the same? My ADF friend immediately shot back with Taliban militants fight under the influence of drugs. 'What's going on here?'

The term 'junkie jihadis' is taken from an article written by Lukasz Kamienski titled, ‘Junkie jihadis and the narcotic ways of war.’ Kamienski is also author of Shooting Up: A Short History of Drugs and War (2016). Kamienski would appear to support my ADF friend's assertion that Taliban militants/jihadis fight under the influence of drugs, however, the question, among many others, becomes, why?

One of the strategic uses of emotion to counter fear in war that Liaras and Petersen identify is the creation of anger. Sun Tzu also identifies this strategy in his The Art of War written some 2500 years ago when he explains to get soldiers to fight they need to be angered. Anger is the emotion of courage according to Biswas-Diener in Courage Quotient: How Science Can Make You Braver. Turning fear into anger in order to fight is also the principal strategy taught in women's self-defence.

Why would the Taliban militants/jihadis need to turn fear into anger in order to fight? Do they, in fact, need to overcome the fear of death and injury in order to act and survive on the battlefield? After all, do they not have enough reason to be angry, to hate (which is an anger-emotion family member)? America and their allies invaded their country, killing their comrades, friends, family, and fellow countrymen, destroying their homes, and occupying their country for two decades. This in addition to their religious beliefs behind their jihadism.

The question then becomes, if they do not need drugs to overcome their fear of death and injury in order to act and survive on the battlefield because anger and hate has replaced fear, why are they taking those drugs. And when I say drugs, I am referring to stimulants that are used to enhance combat performance (see Kamienski's Shooting Up). Not depressants or hallucinogenics, but stimulants. In their case 'captagon' which is an amphetamine based psychactive substance.