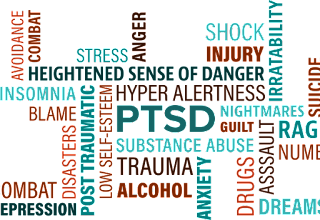 PTSD was introduced as a diagnosis in the third edition of the American Psychiatric Association's (APA) Diagnostic and Statistical Manual of Mental Disorders (DSM) published in 1980, however, the PTSD story starts with World War I and the U.S. Army's Medical 203.

When writing about the ‘darker side’ of military mental healthcare, Russell, Schaubel, and Figley (2018) explain how all major European armies witnessed unprecedented, some would say epidemic, numbers of psychiatric casualties during WWI. Hundreds of thousands of military officers and enlisted members were being discharged, sent home, and given disability pensions for afflictions like shell shock and traumatic neuroses. European governments and military departments, they explain, became increasingly alarmed by this epidemic of war psychiatric casualties that existentially endangered the military’s capacity to fight and win wars, as well as producing skyrocketing disability pension costs threatening to bankrupt economies. In response, military leaders were forced to solicit the services of mental health professionals whose discipline was still in its infancy at that time.

What developed from the mental health professionals involvement came to be known as ‘frontline psychiatry’ where psychiatric casualties are treated as close to combat areas as possible with the firm expectation that the troops will return quickly to duty. Russell, Schaubel, and Figley explain that a comprehensive review of the military’s frontline psychiatry policies demonstrates its unquestioning effectiveness in preventing psychiatric evacuations. Note the focus on psychiatric ‘evacuations.’ The focus of the program is on preventing psychiatric evacuations not long-term mental health, which is reflected in the motto of the U.S. Army Medical Corps, ‘conserve the fighting strength’ (Jones and Wessely 2003), or as Russell, Schaubel, and Figley put it, to ‘preserve the fighting force.’

This is my own cynical evaluation of this process (which is part of the abovementioned darker side of military mental healthcare). How could frontline psychiatry fail? A soldier suffering combat stress reactions is taken off the frontline thus removing the stressor. They are kept close enough to the front to be reminded of their comrades fighting at the front, aka receiving support from their comrades, and how they are letting them down. The soldier returns to combat where their condition was indeed transient and they once again engage in combat in an effective manner. No psychiatric casualty going home. The same soldiers' fighting abilities may be impaired because of a mental disorder associated with the stress of combat and they are wounded or killed in action. WIA or KIA, no psychiatric casualty going home. They may desert because of their mental condition caused by the stress of combat, in which case they are a deserter and not a psychiatric casualty going home. They may abuse alcohol and/or drugs as a means of coping with the symptoms of their mental condition brought on by the stress of combat, in which case they are disciplined and possibly dishonourably discharged for behavioural problems. No psychiatric casualty going home. How could frontline psychiatry fail? It is genius, not unlike Catch-22.

In order to avoid a repeat of the same psychiatric attrition and subsequent disability pension costs of WWI, the Second World War saw the large-scale involvement of American psychiatrists in the selection, processing, assessment, and treatment of American soldiers. They were, however, hampered in their efforts because they were utilising a system of classification that was developed primarily for the needs of public mental health hospitals (Statistical Manual for the Use of Institutions for the Insane). ‘Psychiatric nomenclature which was barely adequate for civilian psychiatry was totally inadequate for military psychiatry’ (Brill 1966, 229), so the U.S. Army went about developing their own classification system. That classification system was published in War Department Technical Bulletin, Medical 203 issued on 19 October 1945 and came to be known simply as Medical 203 (Med 203).

Med 203 included a 'combat exhaustion' diagnosis which we will explore in the next post.

This exploration will also demonstrate how the mental health discipline/professionals/practice came to gain credibility and how it is based in war time practices.