'The All Or Nothing Law Of Strangulation' 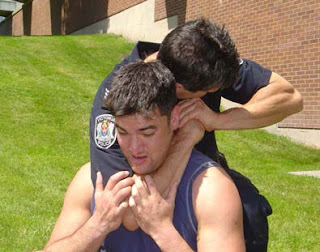 Currently the subject of chapter 12 of my book is strangulation techniques or shime waza. My research has uncovered some fascinating information, particularly from the world of forensic pathology. This blog will share one of the research papers in particular with you along with references to others.

Law enforcement include neck holds or neck restraints (they couldn't very well call them strangulation techniques) within their use of force options. The Canadian Police Research Centre conducted a review of the neck restraint literature. Their report includes the following quote concerning the use of neck restraints by law enforcement:

'once applied, it [the neck restraint] provides more protection to the officer than any other known method of control, and it concludes physical resistance without injury to the subject faster than any other restraint means known.'

'Regardless of any size or strength, the officer can employ LVNR against any subject because its use is target-specific during application.'

Despite their efficacy, some jurisdictions have dropped neck restraints from their use of force options because they have been 'linked' to suspect fatalities. We teach these techniques within the martial arts so I thought it behoves us to know their risks. Risks to our students in training, risks to competitors in combat sports using these techniques, risks for our students using these techniques in security work or in self defence. I've studied many texts and research articles and I thought I'd share an interesting one with readers of my blog entitled, 'Forensic assessment of survived strangulation' published in Forensic Science International (153: 2005)

The research was conducted at the Institute for Forensic Medicine at the University of Berne, Switzerland, by T Plattner, S Bolliger, and U Zollinger. They studied 134 survived strangulation cases between 1987 and 2002 to see if findings and symptoms of survivors could be related to the fierceness of the assault and mode of strangulation. Included in their paper is the following interesting statement:

The exact pathophysiological pathway, which ultimately causes death in strangulation, is not completely known as yet. There is no doubt among forensic pathologists, that obstruction of the blood vessels must be the main factor, while narrowing of the airways most probably plays a minor role. On the other hand, obstruction of cerebral bloodflow cannot be regarded as the sole responsible pathophysiological process. In that case, various degrees of hypoxic cerebral damage depending on the duration of hypoxia would occur. Cases of sustaining neurological impairment or delayed death after strangulation are however rarely reported. A fact that has been called 'the all or nothing law of strangulation' by Jacob. The role of the cardiac reflex by pressure on never structures in the neck (vagal nerve and glomus caroticum) in strangulation is a recurrent subject of controversial discussions among experts.

I have read somewhere else that strangulation is overwhelmingly an attack by men on women. This study confirms that, with the following age and sex distributions: 4 (3%) of the survivors were children and the remainder 130 (97%) were adults; 20 (15%) were male and 114 (85%) were female. In 112 cases (83%) the victim was female and the suspect was male. All male victims were assaulted by males and in two cases both the victim and suspect were female. In 47 (35%) cases the strangulation was inflicted during a rape or rape attempt.

When considering the legal implications of an attempted strangulation, given the legal nature of forensic pathology, they explain:

No one can deny that strangulation is a dangerous form of assault. It would however be wrong to consider any grasp on the neck as life threatening. The threat to the victims life is greater with increasing intensity and duration of the assault. But when exactly does pressure on the neck become a danger to the life of the victim?

Because of the structures involved, neck holds must be considered potentially lethal under any circumstance and used only when there is no other alternative. Use of neck holds must be viewed in the same way as firearms; the potential for a fatal outcome is present each time a neck hold is applied and each time a firearm is drawn from its holster. The neck hold differs in that its fatal consequence can be totally unpredictable. ... No officer should be lulled into the false confidence that squeezing an arm about the neck is a safe and innocuous technique of subduing a suspect. It must be viewed as a potentially fatal tactic and reserved to situations which merit its risk.

If, as Reay and Eisele suggest, there is a risk of a fatal outcome present each time a neck hold is applied and the fatal consequences can be totally unpredictable, what does this say about our duty of care in teaching and using these techniques? There is a flipside to this argument as well. If a neck hold is considered lethal force, then if a neck hold is applied or attempted to be applied to oneself, this could be considered a threat to ones life which entitles lethal force to be used in self defence. With this sort of argument, how could the authorities sanction the use of these techniques in combat sports? It raises, as I said, interesting legal, ethical, and moral issues.

The subject of strangulation techniques/shime-waza/neck holds is far from clear. This blog is just a small fraction of the work I've undertaken in studying this subject and which will make up my chapter 12.

Let me know any thoughts and if you find this work interesting.