Fear and the COVID-19 War 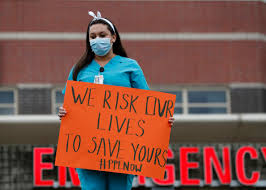 War had been declared on COVID-19 and war time restrictions imposed.

What do professional warfighters have to say about fighting a war? The US Marines Warfighting manual has this to say about the human dimension in war:

Since war is a violent enterprise, danger is ever present. Since war is a human phenomenon, fear, the human reaction to danger, has a significant impact on the conduct of war. Everybody feels fear. Fear contributes to the corrosion of will. Leaders must foster the courage to overcome fear, both individually and within the unit. Courage is not the absence of fear; rather, it is the strength to overcome fear. Leaders must study fear, understand it, and be prepared to cope with it.


The COVID-19 war is not a violent enterprise, however, danger is ever present. Fear, the human reaction to danger, is having a significant impact on the conduct of this war. We are all potential warfighters, however, there are those how are all ready on the front-line. We must all study fear, understand it, and be prepared to cope with it.

Franklin D. Roosevelt famously said that there is nothing to fear but fear itself. All very 'positive' and motivating, however, it is just as much rubbish now as it was then. Of course there is something to fear - COVID-19 which has killed 75,000 and counting (although the Chinese seem to possess a different counting system).

Colonel John M. House in Why War? Why an Army? explains that fear is a natural response resulting from the instinct for self-preservation. 'Only a fool would face combat unconcerned for his safety.' We are seeing many fools in the COVID-19 war.

Fear is an emotion that was selected for in nature because it conferred a survival advantage on an individual. Without fear we and the human race would probably not exist. When people advise us to trust our instincts, they are in fact advising us to trust fear for instinct is fear whispering in our ear.

Fear does not say lie down and die. Fear says there is danger, let's do something about it. Even if that something is freezing in place. Fear is always trying to protect us. As Fear says in the Oscar award winning movie Inside Out, 'All right! We did not die today, I call that an unqualified success.'

Fear is not our enemy. Fear is our ally. Always has been since the dawn of human existence. Get to know fear and make it your friend.

The Warfighting manual refers to courage to overcome fear. Courage is that nurse who is risking her life tending that COVID-19 patient and says to Fear, 'Thanks, but I've got this from here.' That nurse is courageous because without fear there is no courage. Fear enabled courage. Fear enabled courage by the decoupling of stimulus and response in emotion. This decoupling provides latency time where alternative actions may be considered in addition to the actions provided by nature.

This is not theory for me. I live with fear's close cousin, anxiety and on occasion I have been visited by fear's big brother, panic. I don't necessarily like this family, however, since I have no choice I've learned to live with them. They are not as scary as they first appear and they do have a bad reputation, however, they mean well.

When you study fear you get to know fear and you get to know how to cope with fear. The Warfighting manual is spot on in that respect and it is sound advice for all of us in this COVID-19 war.

Posted by John Coles at 8:07 AM No comments: