The recent Australian cricket ball tampering scandal (sandpaper-gate) works as a case study for the 'enigma of courage' as General Sir Peter de la Billiere puts it in the forward to 2007 edition of Lord Moran's classic The Anatomy of Courage:


Moral courage is higher and rarer in quality than physical courage. It embraces all courage, and physical courage flows from it. We are all faced with decisions requiring moral courage in our daily lives, even at home – disciplining and teaching our children for example. It is applicable in business, in law, within institutions such as schools and hospitals. It takes moral courage to stand up against the crowd, to assist a victim of bullying or to reveal negligence where others would prefer it to remain hidden. Moral courage implies the belief that what you are doing or saying is right, and are willing to follow through your conviction regardless of personal popularity or favour. So easy to expound, so demanding to achieve. In my experience a person of high moral courage will seldom fail to demonstrate an equally distinguished level of physical courage.


There is no doubt that the three cricketers involved in this cheating scandal possessed physical courage, but did they possess moral courage? The courage to stand up against the crowd, which in this case was the 'leaders' of the team.

My experience with Jan de Jong's Self Defence School is that we were adept at teaching physical courage, however, some of the instructors demonstrated a lack of moral courage. How do we go about teaching moral courage?

PS: This post arises out of my work on the tentatively titled Fear and Fight: Understanding Our Natural and Learned Responses to a Threat.

There was an article published that said 'Australian doctors' want martial arts/combat sports banned because they normalise violence.

Many viewers of the Kojutsukan blog will be martial artists and will immediately object to that assertion and may even be insulted by it, however, I counsel you to objectively assess all assertions. Something that is not generally encouraged in the martial arts.

Is there anything inherently wrong with normalising violence?

The general idea behind the Australian doctors argument is that by normalising violence you encourage violence from those that have been normalised.

Women's self-defence. Based on that argument, women who participate in WSD courses are normalised to violence and are therefore more likely to be violent.

Based on that argument our prisons should be filled with ADF personnel.

Never reject a proposition out of hand. Consider it objectively. It often helps to consider the proposition in another setting.

Posted by John Coles at 8:44 AM No comments:

I am done! I have completed The Science Behind Fighting Techniques and am in the process of preparing the submission to a publisher. I am resisting the temptation to yet once again review this work. I am done.

In my last post, The Science Behind Kiai, I promised to share with the mindset necessary when attempting to use science to explain practice in the martial arts. Here is the extract from my conclusion in The Science Behind Fighting Techniques:

What mindset or attitude should we adopt when attempting to use science to explain techniques? You may be horrified to know that I am about to refer to the Australian Auditing Standards (ASA) to answer that question. ASA 200 requires an auditor to adopt an attitude of ‘professional scepticism.’ Professional scepticism is defined in the Auditing Standards as ‘an attitude that includes a questioning mind, being alert to conditions which may indicate possible misstatement due to error or fraud, and a critical assessment of audit evidence.’ Professional scepticism is fundamentally a mindset. A sceptical mindset drives auditor behaviour to adopt a questioning approach when considering information and in forming conclusions.

Scepticism and questioning are not generally encouraged in the martial arts, however, we must adopt that mindset and approach when attempting to use science to explain practice. This is no better explempified then my ‘so what’ questions of the science currently used in martial arts and biomechanical texts to explain punching and kicking techniques (see chapter 10). That questioning led me to injury science which provides the foundation for understanding all punching and kicking techniques taught by all activities associated with preparing a person to engage in a violent encounter (see chapter one) and those used in violence generally. This questioning approach also led me to question the injury science transfer of energy explanation of injury causation (see chapter nine) which in turn led me back to mechanical force (see chapters four and nine). This then enabled me to better understand the science behind breakfalling techniques (see chapter 12). However, there is a risk that adopting a sceptical mindset and questioning approach when considering the science behind fighting techniques and forming conclusions thereon might lead to the heretical adoption of the same mindset and approach to the how-to instruction. Although that scepticism and questioning would be based on a growing body of knowledge associated with why a martial arts technique works, which this book is designed to contribute to.

Email ThisBlogThis!Share to TwitterShare to FacebookShare to Pinterest
Labels: The Science Behind Fighting Techniques

The Science Behind Kiai

Kiai is a Japanese term that is used to refer to a short yell or shout uttered when performing an attacking move. Why kiai?

The following is a draft of a passage included in the conclusion to my The Science Behind Fighting Techniques which is in the process of being submitted to a publisher. The conclusion calls on others to build on my work in building a body of knowledge about why a technique works in addition to how to perform the technique.


As I was in the process of concluding this book, Australian Ashleigh Barty played Belorussian Aryna Sabalenka in the 2018 Australian Open (tennis). The Belorussian’s powerful hitting and loud ‘grunting’ was cause for numerous articles on the issue to be published, one of which was by Damian Farrow (2018), professor of sports science at Victoria University: ‘All the racquet: What science tells us about the pros and cons of grunting in tennis.’ He reports that a number of studies have shown that ball velocity increases with hits accompanied by grunting. Can the findings in those studies be extended to kiai, a short yell or shout uttered in Japanese martial arts when performing an attacking move? Increased ball velocity means increased force is being applied when hitting the ball accompanied by a grunt. Can those findings be extended to prove that punches accompanied by a kiai apply increased force on impact? If so, how does a grunt/kiai generate more force on impact with a punch? This is an example of the current lack of biomechanical information associated with martial arts methods and how we may need to be inventive in developing that knowledge base in the absence of direct research.

The studies associated with tennis grunting confirm the increased velocity of the tennis ball accompanied by grunting. They do not explain where the additional force that was applied to the tennis ball was generated from.

The answer to the increased force on impact lies within the concept of kinetic energy. KE is the energy of motion which is transferred on impact. KE is calculated as one half of the product of mass and velocity squared. So which one of the variables of KE does grunting/kiai impact on in order to increase the KE of the arm/racket thereby increasing the force on impact?

The tennis studies limited explanation is highly technical/incomprehensible, however, it would appear to point to grunting tightening the body core which increases the mass behind the tennis strike thereby increasing the force on impact resulting in the increased velocity of the tennis ball. In like manner, a kiai when punching might tighten the body core thereby increasing the mass behind a punch and the force on impact.

1. The findings in the studies above goes against everything that has been advised in martial arts and biomechanical texts in relation to punching techniques when referring to the biomechanical concept of KE.

2. There is a study published on the effects of kiap, the Korean equivalent of kiai, on gripping strength. A martial arts 'authority' refers to this study to confirm that kiap increases punching force on impact. It does not, as even the authors of the study acknowledge. It simply confirms that kiap increases gripping strength, so kiap away when grabbing someone. The tennis studies have more to suggest that kiai increases the force on impact than does the kiap study. 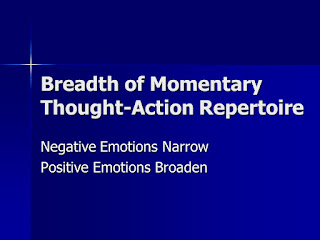 Ironically, I was diagnosed with generalised anxiety disorder and panic disorder while researching and writing this book. In treating the disorder I have visited a few psychologists. I tried to explain certain 'symptoms' and could actually explain what exactly is going on. One aspect intrigued me as the psychologists had never heard of the research that explains the symptoms.

She explains how negative emotions narrow a person's thought-action repertoire. They increasingly focus on one way to deal with the threat. Their cognitive abilities, their reasoning, problem-solving, thought processes progressively narrow. This is why you cannot reason with a person who is angry, scared ... or anxious.

I'm in the closing stages of finalising book #1 on the science behind fighting techniques. The introduction leads with Gracie and Gracie's (Brazilian Jiu-Jitsu: Theory and Technique) explanation of black belts as being fully qualified teachers who are expected to know why a technique works in addition to knowing how to perform the technique.

My final chapter asks how Gracie and Gracie operationalise their expectation of black belts. They don't do it through their grading system (if they do it at all) because they explain how the Brazilian jiu-jitsu grading system is characterised by its extreme informality.

I've begun to research how other schools produce their teachers. For the most part, it is that a black belt (a) knows how to perform techniques, and (b) that knowledge and that grading qualifies them to be a teacher.

How does your school produce teachers?
Posted by John Coles at 9:06 AM No comments: