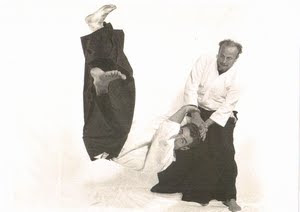 I'm currently working on chapter 10 in my tentatively titled Throwing Techniques and Takedown Techniques of ALL Martial Arts. This chapter concerns breakfalling techniques (ukemi waza). A GREAT deal of research has gone into this chapter. I thought I'd share just a little at this stage to hopefully garner further interest in my work and some comments.

The World Health Organisation has this to say on falls:

Globally, falls are a major public health problem. An estimated 424,000 fatal falls occur each year, making it the second leading cause of unintentional injury death, after road traffic injuries. … Though not fatal, approximately 37.3 million falls are severe enough to require medical attention occur each year. Such falls are responsible for over 17 million DALYs (disability-adjusted life years) lost. … In addition, those individuals who fall and suffer a disability, particularly older people, are at a major risk for subsequent long-term care and institutionalization. The financial costs from fall-related injuries are substantial.

Human movement specialist, Arthur A. Chapman, is a big fan of teaching techniques for landing safely from a fall to the wider community. In Biomechanical Analysis of Fundamental Human he describes the two basic landing strategies taught by the martial arts and suggests 'all good school physical education classes should teach [these techniques]' (2008: 88). In their chapter entitled 'Biomechanics of Combatives' in Biomechanics of Human Movement, Marlene J. Adrian and John M. Cooper likewise recommend the benefits of teaching breakfalling techniques to the wider community: 'Falling and landing effectively with a minimum of injury are also necessary skills to attain longevity in sports, industry, and daily living' (1995: 279).

Injury Science published a research letter submitted by Dr. Frank J. Leavitt (Faculty of Health Sciences, Ben Gurion University of the Negev, Beer Sheva, Israel) titled 'Can martial arts falling techniques prevent injuries?' (2003: 284). I'd like to take this opportunity to inform the reader that there is some professionally researched works related, or which can be related, to the martial arts which unfortunately are hidden away in academic journals and would never see the light of day in the normal course of events. Secondly, I'd like to use this article to inform the reader of some of the work they can expect in this chapter.

Leavitt explains that 'although falling techniques are taught to martial artists, athletes and paratroopers, a BMJ search of Highwire listed journals has discovered no mention of "falling correctly", "safe falling", etc.'. My research has revealed there is very little research published on fall-arrest techniques (falling techniques are pretty simple but landing safely is the tricky bit) - but there is some. I start out my chapter with a paper investigating the natural (evolved) way humans try to land safely from falls to the front, rear, and side. I refer to these as 'nature's breakfalling techniques'. Part of nature's breakfalling techniques is the use of landing on outstretched hands which often results in a FOOSH (Fall On OutStretched Hand) injuries (see a previous blog). I then intend to write about the studies that have investigated proposed improved methods of falling safely from falls to the front, rear, and side.

'The ease with which martial artists take even very hard falls suggests the hypothesis that falling practice while relatively young can prevent injury from falls incurred later in life.' Here's hoping this is true given I'm entering the later in life period of my life.

'A Japanese study of 11 deaths and serious injuries in aikido from 1972-75 listed eight due to falling. Most of the victims were relative beginners, suggesting that those who practice over long periods are more protected.' Since commencing training in 1983, oh so long ago, I've seen relatively few injuries due to falling. The most severe was in a seminar conducted in Sweden in the 90s. We (Jan de Jong and myself) were teaching a throwing technique (definitely not a takedown technique)and one of the seminar participants, a yudansha (black belt holder), used an outstretched hand to arrest his fall. Both the radius and ulna were shattered requiting plates on both bones.

'Martial arts tend to have rather specialised falling techniques. Aikido falls may not protect you in cases where judo falls will be effective.' Too true. The types of ukemi waza taught reflect the types of techniques taught. Aikido tends to 'project' (a term that is often used in aikido to refer to throws) so rolling ukemi waza tend to dominate. Judo tends to throw down so 'flat falls' tend to dominate. Interestingly enough, virtually nobody teaches a sideways roll. They teach a forwards, backwards, and sideways flat fall, and a forward and backwards roll, but not a sideways roll. Again, this tends to reflect the types of falls initiated by the throws and takedowns taught within these schools. Jan de Jong jujutsu is relatively unique in teaching a sideways roll. Very useful when practicing ukemi waza by leaping from a scooter as Jan de Jong demonstrated in one of my past blogs. The ukemi waza of Jan de Jong jujutsu will also be included in this chapter.

'There is plenty of anecdotal evidence of martial artists coming out safely from quite dangerous falls.' A previous blog of mine added to the anecdotal evidence when I described Greg Palmer's use of ukemi waza to survive a motor cycle accident and Hans de Jong's use when falling from a tree while tree lopping.

'It remains to be seen whether safe and enjoyable methods might be developed to teach selected falling techniques to the general population.' They have been developed. Only Brenda Groen and her Dutch colleagues have studied martial arts techniques to reduce the severity of falls. Her PhD thesis which she finished this year and which she kindly sent me a copy, is entitled 'Martial arts techniques to reduce fall severity'. The technique she studies is included in an expansive fall prevention program currently being taught to the elderly in Holland. There have also been studies published which have investigated the efficacy of this technique within this program and participants. I'm intending to include discussion of these studies within this chapter as well.

Any and all comments are appreciated. My work can only improve with these comments. Thank you.
Posted by John Coles at 9:47 AM