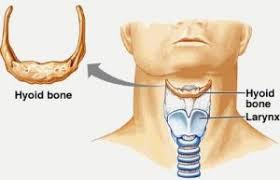 I am in the process of finalising my first book on the science behind fighting techniques. One of the chapters is devoted to strangulation techniques (shime waza). In that chapter I refer to an injury I sustained to my throat when participating in a demonstration with Shihan Jan de Jong OAM 9th Dan. Researching that injury led me to a study of a similar injury sustained by a taekwondo athlete when he was kicked in the throat during a competition bout. The following is taken from my draft, and to understand the extract you'll need to know that the hyoid bone is located in the anterior neck at the level of the C3 vertebra.


An example of DiMaio and DiMaio’s nonfatal injuries to the neck as a result of forces applied with a strangulation technique is the injury I sustained doing a demonstration with Shihan Jan de Jong OAM 9th Dan (see Appendix) at the conclusion of a summer camp in Norway. De Jong was demonstrating defences using a jo, a wooden staff approximately 1.27m (4.2ft) in length. His timing on my punch was off a bit but he took me down anyway and wedged the jo across my throat as the defence requires. He applied a little more force than normal to make up for the timing problem which resulted in an injury to my throat structures. According to my GP (general practitioner), the injury may have been a fractured hyoid bone as I had trouble swallowing and painful swallowing for some period of time and the hyoid bone is often fractured in strangulations.


When investigating my GP’s suggested diagnosis, I came across a case report[ii] of a thirteen year old taekwondo athlete who collapsed after receiving a kick to the anterior neck. Lateral radiographs revealed fracture of the hyoid. Based on their review of the literature, the authors of the report suggest that striking and choking techniques commonly employed in martial arts provide potential mechanisms for hyoid bone fractures. Disturbingly, given that I did not seek treatment for the injury, the authors of the report also suggest that all patients suffering a hyoid bone fracture must be observed for a 48-72 hour period as previously asymptomatic patients may develop rapid hemoptysis, edema, ecchymosis and spasm resulting in life threatening asphyxia, requiring a tracheostomy and retro-pharyngeal drainage.