Coping With The Reality Of Violence 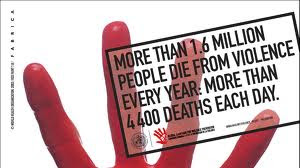 This morning I read: A world of illusion: Coping with the reality of violence. It is an essay concerning violence and what we can do. The author asks, 'What can we do?' He suggests, 'The best we can do is take those measures that are prudent,' and 'The best you can do is take whatever measures are reasonable in your particular environment.' Injury science offers ways and means of operationalising this advice. 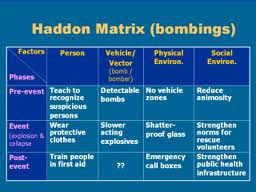 The factors are based on epidemiology. They are host (person injured), vector or vehicle (animate or inanimate object inflicting the injury), and environment (physical, social, cultural, etc). The phases are before the interaction of host and vector (before assault), during interaction (assault), and after interaction (after assault).

This matrix is an analytical tool and a strategy brainstorming tool. It aids us in analysing an injury event (act of violence). It aids us in analysing the risk of an injury event. It provides multiple intervention points to prevent or control injury in the case of a violent event. The traditional martial arts model tends to focus on the host-vector cell alone. There are eight more cells where interventions can be introduced to prevent or control injuries arising from a violent event.

The Haddon Matrix forces you to think about all the factors and all the phases in an injury/violent event. It then encourages you to consider interventions at the different stages and with the different factors that contribute to the event. The author of the abovementioned post quite rightly referred to environment. However, it is the interactions between the host (victim or potential victim), vector (aggressor), and the environment that define the injury event. All three and their interaction have to be considered. Typically, this is poorly done in the martial arts and self defence courses.

This topic is far too detailed and large for a blog post. This post is designed to (a) inform the reader there is a tool that assists in developing strategies to counter the effects of violence, (b) introduce the reader to the Haddon Matrix concept, and (c) interest the reader in my work.
Posted by John Coles at 8:59 AM 1 comment:

Injury and pain are two phenomena that are at the very heart of all fighting methods. They are a major feature in the definition of offensive and defensive aggression and violence. Explicit explanation of them are also noticeably absent in the literature associated with preparing a person to survive a violent encounter.

I'm currently writing a chapter on injury referencing the theories and concepts of injury science. Injury science is a relatively new science that studies injury and the causes of injury. It is also a science that has hitherto not been explicitly referred to within the literature associated with preparing a person to survive a violent encounter.

The following is one section of that chapter which deals with duty of care. Duty of care is a concept that is often referred to by lawyers and non-lawyers alike but which many non-lawyers have never actually studied. Lawyers only know it from a legal standpoint, not from a practical standpoint.

The modern concept of duty of care was first defined by Lord Atkin in the famous landmark case of Donoghue v. Stevenson. This case was an appeal to the House of Lords England by Mrs Donoghue who became ill after drinking a bottle of ginger beer that was contaminated by a decomposing snail. She subsequently sued Stevenson, the manufacturer. Finding in favour of Mrs Donoghue, Lord Atkin said: 'The rule that you are to love your neighbour becomes in law, you must not injure your neighbour; ... You must take reasonable care to avoid acts or omissions which you can reasonably foresee would be likely to injure your neighbour.'

How does a person or organisation discharge their duty of care? By taking reasonable care to avoid acts or omissions that would likely injure a person to whom a duty of care is owed and which are reasonably foreseeable. The Donoghue v Stevenson case focused on who the 'neighbour' is, who a duty of care is owed to, however, let's get back to core of the problem – injury and the cause of injury.

If you want to avoid injuring a person, surely it behoves you to first understand what causes an injury. Injury science not only provides the means to understand what causes an injury, it provides means and ways of understanding and identifying means and ways of preventing and controlling injury. In this way, the theories and concepts of injury science have a great deal to contribute to the discharging of a duty of care.

The Japan Judo Accident Victims Association (JJAVA) was established in response to 108 student (aged between 12 and 18) fatalities in Japanese junior and senior high schools from 1983 to 2009 as a result of judo accidents. Their mission is to 'support victims and find ways to reduce death and serious injury among students in Japan through introduction of effective safety measures as standard practice in the sport of judo.' The first thing that injury science would offer in support of the JJAVA mission is: injuries are not accidents.

Sommers explains that 'the term "accident" denotes an unforeseen, unexpected event that is the result of chance, fate or destiny. It is also used to describe human error or mistake, which thereby excludes the person from the consequence of injury' (emphasis added. If the above fatalities are the result of an accident, then by definition they are unforeseen and there is no breach of a duty of care. There would be no legal obligation for the instructors or school authorities to take reasonable care to avoid these injuries because they are unforeseen 'accidents.'

When arguing for the need to discontinue the use of the word 'accident' when referring to unintentional injury events, Langley refers to a survey of women whose children had been injured. The results showed that many of them had not taken any action to prevent a reoccurrence of the event resulting in injury. The findings suggested this was not because such events were perceived as being too difficult to control, or action was inappropriate, or that the event was useful education for the child. Rather, many mothers saw the incidents as something which by definition could not be prevented – an 'accident.'

'Accidents will happen' – this was a post on an internet forum by an internationally renowned (but unnamed here) martial arts authority discussing the JJAVA experience. What impetus is there to find ways to reduce death and serious injury among students if the fatalities and serious injuries are the result of accidents, and accidents will happen? By definition they are unpredictable and unpreventable.

Sommers suggests that a better understanding of the nature of injury in the past few years has led to a reconceptualisation of injury as a largely preventable event. The JJAVA mission of preventing future fatalities and serious injuries is supported by the injury science mantra that injuries are not accidents. The JJAVA mission would be further supported by reference to injury science theory. The duty of care espoused by Lord Atkin only refers to preventing injuries. Injury science goes beyond mere prevention. Injury science offers solutions to prevent and control injury should injury occur. Injury science offers solutions that limit the exposure to legal liability associated with a breach of duty of care. Injury science goes beyond the mere legal to our moral and ethical duty to prevent and control injury generally.

The above is a first draft. After reading it in this post, I am struck with the emphasis that duty of care is NOT just a legal duty. It is not something that is dealt with by purchasing insurance. It is a moral and ethical duty before it is a legal duty. It is not a risk that is transferred to a third party via insurance; it is a risk you address youself in order to discharge your moral and ethical duty of care. And how can you address your duty of care if you don't know what causes an injury?

Thirdly, injury science's mantra, injuries are not accidents, makes a mokery of coroner's 'accidental death' rulings. There is no accidental death. One-punch deaths, which have been a subject of previous posts on this blogs, are not accidental deaths. The legal system defined them as so up until, in Western Australia, specific legislation assigned responsibility for one-punch deaths to the aggressor who initiated the process that led to the death. The legal system is slowly catching up with injury science.

My book will be the first in the literature associated with preparing a person to survive a violent encounter that will address this issue directly.
Posted by John Coles at 2:00 PM No comments: 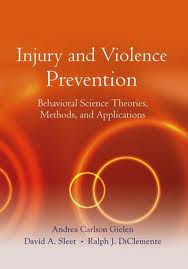 There is a saying about writing a book: it's like drinking an ocean and pissing a cup. That is so very true in my experience. I have drunk the ocean, and pissed a barrel. I'm now in the process of drinking the barrel in the hope of pissing a cup. This is a rather crude way of saying I'm in the redrafting process.

I came across a relatively new science that studies injury when attempting to understand the science behind striking and kicking techniques. The martial arts and biomechanics literature do a very poor job of relating biomechanical principles to technique in any meaningful way. It was when I decided to tackle the problem from the opposite direction and asked, 'What causes an injury?', that I discovered injury science.

No text associated with preparing a person to survive a violent encounter has referred to injury science to date.

To give you a taste of what is to come, and what is possible, the following link is a good example of what injury science has to offer. It uses injury science theory to develop a violence prevention program for emergency departments.

The Haddon Matrix is a powerful tool to help us consider all factors that contribute to a non-fatal or fatal, unintentional or intentional injury. The above is an example of its use.

Posted by John Coles at 9:01 AM No comments: