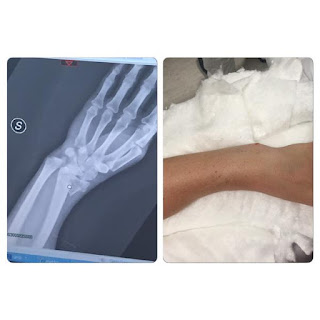 I started off this blog with an article on FOOSH injuries - Fall On OutStretched Hand injuries.

More than 85% of all injuries t the upper limb are the result of a fall onto an outstretched hand.

Ukemi waza (breakfalling techniques) are techniques designed by jujutsu and its derivative arts of judo and aikido to prevent and control injuries arising from a fall, including FOOSH injuries.

The injury to the right was the result of a fall by Sally Pearson, the Australian champion hurdler, during a race recently.

I've seen a FOOSH injury while assisting Shihan Jan de Jong OAM 9th Dan when conducting a seminar in Gottenburg, Sweden. A highly graded student put his hand down while going over his partner's hips who was executing a koshi gaeshi (hip turn) technique. The jujutsuka shattered both his radius and ulna requiring plates in both.

However, I have been able to generate an anatomical explanation of many kansetsu waza and the possible injuries that may arise from their application. The ones I am lacking are the techniques applied to the wrist. If anyone can assist in this regard it would be most appreciated. It would also be a genuine and unique contribution to the general body of knowledge.

Posted by John Coles at 9:36 AM No comments:

Difference Between Throws and Takedowns Part 2 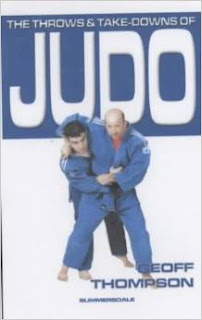 I started to share my journey in developing a definitive distinction between throws and takedowns in the martial arts in my last post.

Eddie Ferrie, in Ju-Jitsu: Classical and Modern, has an interesting take on this issue. He refers to judo's Gokyo no Kata which includes 40 nage waza and suggests that 'there are many more throws commonly practiced and witnessed in competitions that are not included in go-kyo, many are classified as "takedowns" and do not have a proper name.'

It would appear that some in the martial arts have adopted a new term - 'throws and takedowns' - to refer to all techniques designed to cause a person to fall to the ground. The reference to both terms suggests there are two different types of techniques, however, by lumping them all together, it suggests that the similarities are understood but the differences are not.

The journey continues with part 3.

Posted by John Coles at 9:04 AM No comments: