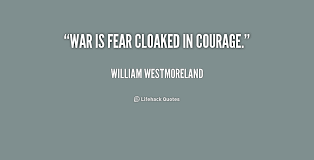 Which would you rather be when engaged in a violent encounter? Courageous or fearless?


Many confuse the two. Many use the terms interchangeably. Some even use the terms together to describe a medal of whatever winner as courageous and fearless. Often the use of the terms are to express our admiration for the actor with no regard to the inner state of the actor.

What do you train for in a violent encounter: courage or fearlessness? In order to answer that question we need to take one step back.

When writing about fear and war, Ardant du Picq in On War wrote: 'Nothing is changed in the heart of man.' The heart of man (and woman) to which du Picq refers is fear. Fear was selected for in nature because it conferred a survival advantage on an individual. Now we need to take another step back.


This priority is seen in the pledge associated with the U.S. Army’s Medal of Honor – ‘I will always place the mission first’ – which is also a part of the U.S. Army’s Soldiers Creed or Warrior Ethos. Nature’s priority is survival first, which is facilitated by fear, the instinct for self-preservation. The instinct for self-preservation and its priority for survival is often at odds with the military priority of mission first. For instance, French explains that ‘The core motivational challenge for warriors to overcome is that they must counter the (perfectly natural) fear of death (or desire to remain alive, to give it a more positive frame) when necessary in order to successfully complete their martial mission.'

General Sir Peter de la Billiere, in the preface to Lord Moran's classic The Anatomy of Courage, explains that 'Courage conquers fear' and that without courage in battle all is lost. The underlying assumptions here is that (a) fear is present, and (b) fear interferes with the priority of mission first. Courage, acting in spite of fear, is needed in order to resist the instinct for self-preservation in order to promote the military priority of mission first.

What about fearlessness? The lack of fear, which means there is no need for courage. The samurai trained for mushin no shin, mind of no mind, which means no emotion. No fear, nor anger. By the by, anger is an empowering emotion which has been used since time immemorial to motivate people to overcome fear in order to fight. Why don't our modern-day military and law enforcement train for mushin no shin? De la Billiere, House, and many others have said that a person who does not fear death and injury in battle are stupid. Were the samurai stupid?

De la Billiere said that anyone going into battle must understand courage. I disagree. They must understand fear. In fact, they must understand emotion full stop. In the AFL they say that 90% of the game is played above the shoulders. What they are referring to is that emotion determines the outcome of the game. Miller in The Mystery of Courage refers to military training as an exercise in fear management. Keegan in The Face of Battle suggested that the study of battle is always a study of fear and usually of courage. Study fear; study emotion; if you are training to engage in a violent encounter.

Posted by John Coles at 7:43 AM No comments: