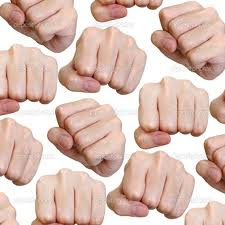 I'm only going to touch on one small aspect of the paper.

Humans buttress – strengthen and stabilize – fists in two ways that apes cannot: The pads of the four fingertips touch the pads at the top of the palm closest to the fingers. And the thumb wraps in front of the index and middle fingers, and to some extent the ring finger, and those fingers are locked in place by the palm at the base of the thumb.

The second and third experiments found that buttressing provided by the human fist increased the stiffness of the knuckle joint fourfold (or reduced flexing fourfold), and also doubled the ability of the fingers to transmit punching force, mainly due to the force transferred from the fingers to the thumb when the fist is clenched.

The authors of the report are describing the common garden variety fist configuration and the biomechanical benefits of this configuration (see figure at top). However, Isshinryu karate teach to place the thumb not wrapping in front of the fingers but to the side of the fingers (see image right).

A possible explanation lies within an obscure but interesting paper published in American Anthropologist. The researchers investigated the relationship between commonly occurring types of violence and those that are popular in sport. They found that common injuries to the hand in modern society where boxing is popular is to the little finger and ring finger bones in the hand, which is commonly known as a boxer's fracture.

The researchers gained access to the 857 bodies when a cemetery was being excavated in England. The bodies were buried between 1750 and 1850. They found significantly more fractures of the thumb than boxer's fractures. This puzzled them because boxing was popular during that time.

They suggest a possible explanation might be found in the style of fighting employed by boxers during the period when the burials were made. Boxing was bareknuckles and boxers used vertical fists rather than the horizontal fist of the modern day boxer. A boxer's fracture often occurs then the little finger side of the fist impacts rather than the intended pointer finger side of the fist. A similar argument applies the to ancient boxers using vertical fists. If the boxer misses with the intended part of the fist the thumb impacts resulting in an injury.

Isshinryu karate may be sacrificing biomechanical efficiency in order to reduce the risk of injury when using a vertical fist to punch. Now there is support if any Isshinryu karate exponent argues the safety aspect of their unique fist configuration.
Posted by John Coles at 12:26 PM