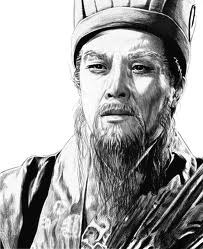 Zhuge Liang (181-234) is a famous Chinese military strategist. His reputation as an intelligent and learned scholar earned him the nickname 'Wolong' (litearlly: Crouching Dragon). Zhuge is an uncommon name and has become synonymous with intelligence and strategy in Chinese culture. He wrote:

Most martial arts would subscribed to this view, however, there is more to this than initially meets the eye.

Anger and fear and their accompanying physiological response were selected for in nature because they conferred a survival advantage on an individual. It's better known as the fight-or-flight response (which is the subject of my article in Blitz this month). Back in the first century, Zhuge is suggesting that these emotions have become maladaptive and now confer a survival disadvantage on an individual.

Before Zhuge was Sun Tzu. He advises that 'in order to kill the enemy, our men must be roused to anger.'

The berserker warrior tradition is a 3,000 year old, cross-cultural phenomenon whereby warriors deliberately enflame their emotions to rage to fight.

Many women's self defence courses teach to turn fear into anger.

Major Greg Mawkes OAM wrote that the SAS are taught to have controlled aggression. Aggression, according to Plutchik, is a combination of anger and anticipation. Anger is a negative emotion and anticipation is a positive emotion.

In Osama Bin Laden: Shoot to Kill, an ex-Navy SEAL explains that the SEALs would have experienced an adrenalin surge, but never fear. The adrenalin surge suggests and emotion is being experienced. Which one? Possibly aggression.

Aggression and violence are often divided into emotional and instrumental. Instrumental violence involves no emotional arousal. It is a well establish phenomenon in the natural world.

No emotion means no physiological response which prepares the body to fight or flee (among other behaviours). The SNS activation and hormonal cascade increases speed, strength, endurance, blood clotting abilities, and pain tolerance. Zhuge's approach, instrumental violence, does not obtain the survival advantages of these physiological responses that accompany emotional arousal.

The above are examples of fighting traditions that are not entirely prepared to forgo the survival benefits that nature bestowed upon us.

Nature's survival mechanism involves emotion, physiological reaction and instinctive behavioural responses. Fighting traditions teach tactics and techniques that are learned behaviours, but they have to be supported by an appropriate emotion and physiological reaction. What emotion do you train for, and why?
Posted by John Coles at 12:01 PM 1 comment:

The July edition of Blitz, Australia's #1 martial arts magazine, published my article on force and how it helps understand all techniques in the martial arts.

The August edition of Blitz will contain an article of mine titled Updating Fight-or-Flight.

While many martial arts, etc., will concur with Zhuge, there are some and some warrior traditions that do not. A more complete understanding of the fight-or-flight concept enables us to better understand Zhuge's comment and the teachings of the martial arts and other activities associated with preparing a person to survive a violent encounter.
Posted by John Coles at 11:10 AM No comments: