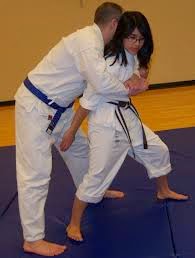 Do you have a sexual harassment policy that all instructors and students are familiar with? If not, why not? Do you even know what sexual harassment is? Not think you know but actually know from study and with authority to support your knowledge.

The Australian Human Rights Commission defines sexual harassment as: Sexual harassment is unwelcome conduct of a sexual nature which makes a person feel offended, humiliated and/or intimidated where that reaction is reasonable in the circumstances.

I don't know, but thinking about sexual harassment and how it is dependent upon how the conduct and contact makes the other person feel alerts us to a greater awareness of how we conduct classes.

I became acutely aware of this issue when I was conducting many private lessons with female students. I developed my own way of dealing with the issue because the school I taught for did not have a sexual harassment policy nor instructed instructors on how to deal with this issue.

I have discuss the above with some male martial artists who dismiss the idea. They suggest that the female student should expect and accept intimate physical contact when training. That is dismissive of the concerns of the student and there are better ways of dealing with the issue.

I was giving private lessons to three female students because they felt 'uncomfortable' with one of the male instructors and the 'attention' he paid them. They decided upon private lessons rather than attending his class. Naively, and ashamedly, I did not take their concerns as seriously as I should have, however, ultimately I did inform the management of the school. The manager's response was to chastise me for saying such things and the claims were never investigated nor the welfare of the women asked after (and please don't confuse manager with principal).

There were failings in this regard in the school I taught at, however, they are common failings because the martial arts industry is essentially amateur in nature and lacks poor governance. The way to rectify this particular failing is to understand the issues associated with sexual harassment and develop a sexual harassment policy that deals with ways to prevent it from happening and how to take remedial action if it does happen, and to ensure that all instructors and students are aware of the policy.

The reference to writing a policy may sound overly officious or ureaucratic to some, however, the discipline of drafting a policy forces one to study and understand the issues involved with sexual harassment. If for no other reason it is a worthy exercise.

A very good start is with the concise information brochure on the subject published by the Australian Human Rights Commission: Effectively Preventing and Responding to Sexual Harassment: A Quick Guide.

A rare example of the martial arts attempting to address this issue is the Australian Ju Jitsu Association's sexual harassment policy. This and other OH&S policies were written by the late Brierley Bailey who was the National Secretary of the AJJA for many years. He was attuned to the need for good governance in order to protect the welfare of students and instructors.

Stu provided some comments on the last post. Stu was dead right when he wrote that the Cambridge Dictionary definition of self-discipline was simplistic. It is. And that is precisely the reason I referred to it, because it would be controversial and promote thinking and discussion. And it has.

I've corresponded about the issue of self-discipline with three intelligent, thoughtful, and experienced martial artists and each has responded with different ideas on the subject. Wonderful. One is for it, another rejecting it, and the other in between. Let's keep this discussion going.

Stu has raised the issue of balance. That martial arts teaches you balance.

I do not disagree, but I also do not agree. It is a complex mix of instructor and student.

I was an exceptional practitioner of jujutsu. I have an above average understanding of the technical elements of jujutsu. Did I ever have 'balance' - God no! In fact, my philosophy was that in order to excel at anything you had to have absolutely no balance. Extreme = unique excellence. There is no Olympic athlete that is 'balanced.'

I may not have all the answers dear readers, but I do have the questions.

Email ThisBlogThis!Share to TwitterShare to FacebookShare to Pinterest
Labels: Philosophy

I'm researching an article on self-discipline that I hope to have published in Blitz. I won't go through the entire discussion because posts on the Internet are suppose to be short to cater for the average reader's attention span of a brick.

Cambridge Dictionary defines self-disciple as forcing yourself to do something even though you don't want to.

I started out training by attending two classes a day, six days a week, and supplemented that with additional training. The attending classes changed from student to teacher but that regime continued for 20+ years. Many would remark on my self-discipline based on that training and teaching regime. They were wrong based on the above definition of self-discipline.

Following this analysis, it is paradoxical that those martial artists who suggest that martial arts training teaches self-discipline must first find students who do not want to train in order to receive the benefits of learning self-discipline.
Posted by John Coles at 10:27 AM 3 comments: