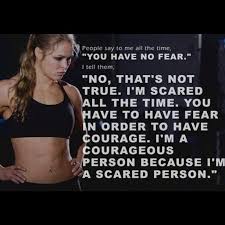 I am continuing to study the concept of courage for an article that has been requested and am thankfully now able to write one that I am satisfied with. It is tentatively titled, 'Do The Martial Arts Teach Courage?' I will be submitted a draft to be published very soon, however, the below is an insight I've gained based on my study of the 'enigma of courage,' as General Sir Peter de la Billiere refers to it.

What is courage? That has mystified people since Plato wrote Laches nearly 2500 years ago and probably even before. Books continue to be written about the subject which is exemplified by William Ian Miller The Mystery of Courage in 2002 (well worth the read if not to study). It remains a mystery today.

The image to the right contains a statement regarding the relationship between courage and fear. An understanding and appreciation of this relationship is extremely important when considering action in violent encounters.

With regards to fearlessness (which by definition is not courage even though some medal recipients are described as exhibiting 'fearless courage' which is an oxymoron by definition), Miller explains,

It is striking how many of those uses of the word 'fearless' do not pretend to describe the inner state of the actor. They are meant rather to register the awe of the observer.


The same can be said of courage. We often do not know the inner state of the actor when we describe them as courageous but are in fact expressing our awe at their actions. But what actually made them act in the face of danger is of immense interest to those teaching and training to engage in a violent encounter. That is the real question. One that the enigmatic, mysterious, and ambiguous concept of courage does not answer.

Maybe more on that later.

Posted by John Coles at 8:56 AM No comments:

I'm writing an article for publication on courage and fear. The part of the article I'm currently working on is to do with 'fearless courage.'

'Fearless' and 'courage' are often used synonymously, so is 'fearless courage' a redundancy?

If courage is defined as acting in spite of fear, how can you have fearless courage when 'fearless' means to have no fear?

William Ian Miller in The Mystery of Courage says that 'it is striking how many of those uses of the word 'fearless' do not pretend to describe the inner state of the actor. They are meant rather to register the awe of the observer.' The same can be said of the word 'courage.'

How many recipients of bravery awards have been asked if they were scared at the time of their 'brave' act?
Posted by John Coles at 8:58 AM No comments:

"It's also taught me that I have to think before I act."

There is a wonderful article published on the ABC news website today about how police officers are engaging with 'at risk' youths through boxing.

The title of this post is taken from the article.

I've been working on an article to be submitted to martial arts magazines on courage and fear, and as part of that article I describe how emotion (fear) enables courage through the decoupling of stimulus and response. It is considered one of the most important adaptive features of emotion as it allows other responses to be considered in response to environmental stimuli other than the instinctive response.

That is, it allows us to not punch the fella when our appraisal of the fella elicits the emotion of anger whose action tendency is fight. Courage and restraint are both enabled through emotion which was selected for in nature because it conferred a survival advantage on an individual.
Posted by John Coles at 10:17 AM No comments: