'Shorter People Have Certain Advantages In Fighting And Warfare' 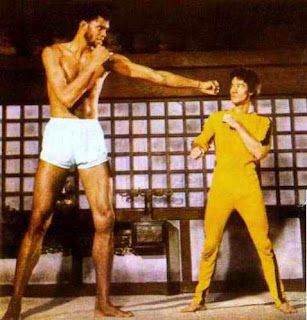 I came across this book this morning while researching certain aspects of injury science (I'll update readers on the progress of my now two books in a later blog). The book is titled Human Body Size and the Laws of Scaling: Physiological, Performance, Growth, Longevity and Ecological Ramifications edited by Thomas T. Samaras. The chapter titled 'Advantages of shorter human height' reviews a number of physical advantages related to shorter height.

This chapter will show that smaller people have certain inherent advantages which can result in outstanding athletic abilities. These advantages include faster reaction time, higher acceleration, greater strength to weight ratio, and increased maximal oxygen uptake and endurance. Other physical benefits include faster rotation, lower risk of death from accidents, lower hip fracture risk, and lower chance of heat stroke. Failure to recognise these assets is probably due to a preference for taller, bigger athletes by sports coaches. As a consequence, smaller men and women with considerable athletic potential from entering many sports. Yet Alexander (1999) reported that smaller bodies are inherently more athletic than larger ones. (47-48)

Thank ... you! It seems these days that taller is better, but this chapter provides support and encouragement for all those (like me) who do not fit this idealised model of an athlete.

Shorter people have faster reaction time: 'Shorter people have a shorter transit time for stimuli initiated in the brain and can thus respond to threatening or dangerous situations more quickly' (48). It appears that tall people would become extinct in the normal course of events as they don't have the features which would be selected for in evolution.

Since the muscles and bones of the smaller athletes are stronger in proportion to body weight, they are more agile and less likely to get injured from high velocity activities and hard landings from sports. Although many big men are outstanding in martial arts, the performance of shorter, lighter athletes are faster and more agile with more exceptional movements compared to tall and big athletes. Examples include Bruce Lee, Jet Li, and Jackie Chan.(48-49)

Shorter people can accelerate their limbs at a faster rate. Injury is defined in injury science in terms of exposure to energy (the subject of book #2 I'm currently working on), including kinetic energy (KE) which is mathematically defined as one half the product of mass multiplied by velocity squared. Mass is arithmetically proportional to the injury potential inherent in injury, but velocity (speed by any other name) is logarithmically proportional. Double mass double KE, double velocity/speed quadruple KE and the potential for injury.

As a result of their greater acceleration, higher strength to weight ratio, and faster rotational ability, shorter people tend to be more agile than taller, heavier people. Thus, they can stop, start and change direction of body movements faster. In addition, they can duck, maneuver and avoid body contact with opponents more easily. ... Short gymnasts and martial arts experts also display great agility. (53)

Shorter people have a lower centre of gravity and greater stability. The concepts of stability and balance (which it appears shorter people possess to a greater degree than taller people) form part of my Throwing Techniques and Takedown Techniques of ALL Martial Arts book.

Shorter People Have Certain Advantages In Fighting And Warfare.
Although brute strength can be a valuable asset in hand-to-hand combat, many highly effective warriors have been small, such as the Gurkhas of Nepal who have been noted as being the fiercest and most effective warriors in recent times. The Japanese have also demonstrated great warrior skills as have the Viet Cong of Vietnam. Many native American tribes of relatively short men were noted for their fighting skills, such as the Commanches, Apaches, and Navajo (Samaras, 1994). The relatively short Gordon highlanders of Scotland were also exceptional warriors (Allinson, 1981). The Greeks and Romans were relatively short but very effective warriors. Audie Murphy, who was shorter and lighter (165cm and 50kg) than the average US soldier, was the most decorated war hero in WWII. Being small may be an advantage in field combat based on statistician Frances Galton who calculated that a tall that a 33% higher risk of being killed in combat compared to a shorter one. Sarna et al (1993) also reported that basketball players in the Finnish military had the highest combat death rate during WWII. In contrast, the shorter athletes had the lowest combat mortality.(54)

In karate and martial arts, many shorter men have excelled due to their greater speed and agility. Some famous smaller size martial arts experts include Bruce Lee, Jackie Chan, Jet Li, and Chuck Norris. However, there are certainly larger fighters in the martial arts who could defeat outstanding smaller fighters if they were well trained and fast for their size.(55)

Smaller people have reduced risk of injury during falls and death from motor vehicle accidents: 'For taller people, tripping while walking can result in more serious injury to the body than for shorter people' (55). The explanation is based on kinetic energy and the definition of injury based on exposure to energy which is the subject of book #2 which I'm currently working on.

There is more, but the more relevant passages have been included within this blog. It offers support for the shorter martial artist, or may change the perception of the martial arts instructor or trainer (there is a difference) concerning their students. I can now explain my exceptional martial arts abilities as I had an advantage in being shorter than many of my contemporaries :).
Posted by John Coles at 10:07 AM

Email ThisBlogThis!Share to TwitterShare to FacebookShare to Pinterest
Labels: Injury Science, Throwing Techniques and Takedown Techniques of ALL Martial Arts