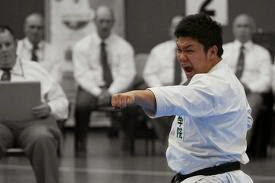 Kiai is a Japanese word that means ki, energy, ai, to join or fit. Aside from the often philisophical and down right ridiculous ascertions made of many things in the martial arts, does kiai have any practical benefits.

The TV show Sports Science investigated the practical benefits of a shout/yell when breaking bricks (aka kiai). They found that a shout/yell increased the force applied to the bricks by 25 percent. They then go on to explain how. It has to do with an adrenalin increase associated with the kiai. But how does that work?

I've written before about Facial Feedback Hypothesis (FFH). FFH postulates that an emotion can be elicted by physically simulating the actions associated with that emotion. Emotions for the emotion discipline is not just subjective feelings. They are a feeling, physiological and action tendency responses to a stimulus. The physiological respone prepares the body for the action tendency associated with the emotion.

Shouting/yelling is associated with anger. The physiological response prepares the body to fight which includes an adrenalin release along with blood being shunted to the arms and hands in readiness to fight.

The same works for beating the chest with fists, making fists, putting on a 'war face.'
Posted by John Coles at 10:16 AM No comments: