Mastering Force Delivery: Why knowing the science will make you more effective

Blitz, Australia's #1 Martial Arts Magazine has published an article I wrote on the use of the biomechanical concept of force to better understand and study martial arts techniques.

The title of this post appears on the front cover of the July 2013 edition, with 'Use the Force' being the title of the actual article.


The Biomechanics of Biffo


All martial arts techniques can be explained using the description 'push' or 'pull' - or so says West Australian jujutsu instructor John Coles, who had devoted years to writing and researching a book on the biomechanics of martial arts techniques. Coles, a 3rd Dan in Tsutsumi Hozan-ryu jujutsu, 1st Dan in Yoseikan aikido and 3rd Degree in Suci Hati Pencak silat, all under the late, world-renowned sensei Jan de Jong, believes that a better understanding of the scientific basis for combative movements - or rather, their successful application - has long been buried in scientific texts. When revealed, he says, it could change the face of martial arts. He begins here by explaining the fundamentals of force.

Posted by John Coles at 1:42 PM No comments: 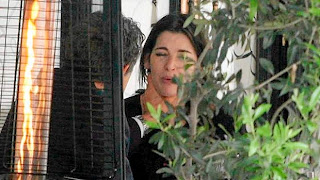 While there are many aspects to this story, the one that stands out for me from Squires' article is related to the following passage:


We could have asked how such a smart, capable, successful, intelligent woman as Nigella found herself in this position, but there was no need. We've both been there and still can't answer that question ourselves. Neither of us can pinpoint just when it became OK to think that this is normal. This is love. This is what I deserve.

I've supported a number of women who have been involved in an abusive relationship. I've read a lot of articles and studies on the subject. The question how they ended up in an abusive situation when they know better is so common it has become cliché.

The boiling frog syndrome refers to the anecdote where a frog will jump out of a pot of boiling water, but will stay and be boiled to death if placed in cool water and the heat of the water gradually increased.

An abusive relationship often starts with a harsh word here or there. Then some name calling. A few derogatory remarks. A shove or two. Finally it ends in physical violence. The first time is a one off, and the relationship complicates matters. This graduation process normalises the process.

What I've seen with women who question how they got to the position they found themselves in - I must be stupid, I must want it on some level, etc - is simply re-victimising themselves. Suggesting the boiling frog syndrome I've found resonates with some domestic violence survivors, and has positively affected how they view how they view themselves.

Posted by John Coles at 2:37 PM No comments:

Email ThisBlogThis!Share to TwitterShare to FacebookShare to Pinterest
Labels: Self Defence, violence, WSD

This speech is not to be listened too. This speech is to be studied. But there is one aspect of the speech I'd like to speak too.

Every one of us is responsible for the culture and reputation of our army and the environment in which we work. If you become aware of any individual degrading another, then show moral courage and take a stand against it. No one has ever explained to me how the exploitation or degradation of others enhances capability or honors the traditions of the Australian army. I will be ruthless in ridding the army of people who cannot live up to its values, and I need every one of you to support me in achieving this.

How do you stand up? In the martial arts, we tend to teach physical tactics and techniques to stand up against others. How are you going to teach A Force More Powerful? The power of non-resistance.

A recent news article reported how a lone man resisted in Turkey by simply standing up and putting his hands in his pockets - a force more powerful. Mahatma Gandhi and his followers walked willingly into lines of police who clubbed them and they did not respond violently. The unidentified man from Tiananmen Square in front of the tanks. How much more powerful than physical force is, 'No.'

Courage is an amazing, misunderstood concept. Shouldn't we be encouraging (teaching) moral courage rather than physical courage to defend oneself?

It was recently reported that Nigella Lawson was assaulted by her partner in a public restaurant. Patrons videoed the assault but NONE intervened. Do you want yourself or your students to be able to defend your/themselves but be one of the photographers at such an incident?

There was a recent event where a young man at an American college was secretly filmed being intimate with another male student. It was broadcast via Skype by the perpetrators and shared with a wider audience. The young man killed himself. What role do you and your student's want to assume in this tragedy.

A very good friend of mine's young son, testosterone fuelled, sporty lad shared with me a homophobic rant in order to demonstrate his manliness. Much to my surprise I was emotionally affected and distressed. I saw him as being the one standing up for the victims, fighting the tormentors. He would never be one of the perpetrators, but it still distressed me that he might have been one of the ones pointing the finger and laughing.

This post is designed to be a reflection on what we are teaching. If we wish to teach moral courage, we must also teach to say 'No' to those confronting us as well as those confronting others, even if we don't know them or even agree with them.
Posted by John Coles at 12:07 PM No comments:

Email ThisBlogThis!Share to TwitterShare to FacebookShare to Pinterest
Labels: Philosophy

Karate Kids Get Lesson In Fighting Back 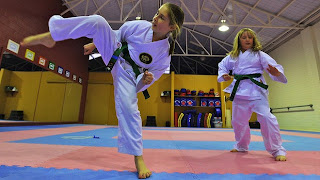 'Karate kids get lesson in fighting back' is an article that published in The Age yesterday. Given my work for my book, I found some of the comments interesting.

Most children are taught the ''stranger danger'' message from a young age, but many parents are viewing martial arts training as a means of reinforcing that message with some physical self-defence skills, as well as for its health and fitness benefits.

My book uniquely contains a chapter on injury science, a relatively new science that studies injuries and the causes of injuries. All of the factors that interact to cause an injury are considered: the host, vector or vehicle, and environment. In this case, the host is the kids, the vector is a potential attacker, and the environment includes social and physical.

Injury events are divided into three time frames over which the factors interact: pre-event, event, and post-event.

Creating a matrix with the factors and phases of an injury event provides nine possible intervention points to prevent and control injuries from violence.

Does martial arts training provide self-defence training? That is a contentious question with different opinions.

Most martial arts develop defences against their own style of attack. Karate teaches to defend against karate attack; judo against judo attacks; wing chun against wing chun attacks. Mixed martial arts was suppose to solve that problem except, through the principle of counter-response and symmetry, a new martial art evolved and defences were designed against those same type of attacks. How effective is this approach in preparing someone to defend themselves against someone who does not attack in the same fashion as those similarly trained?

This raises the issue of teaching one martial art to different ages and sexes. In another blog, the question of the applicability of male centric karate for females was questioned and explored. What then of adult centric karate for kids? Should there be different tactics and techniques taught if self defence is a supposed benefit of training and the vector is defined as an adult or a child of similar age?