Is Ude Garami a Shoulder Lock or an Elbow Lock?


I am currently working on the joint-locking chapter in my book on the science behind fighting techniques. I've come across this rather interesting situation with regards to ude garami (arm entanglement).

The image to the right is the ude garami as taught by the late Shihan Jan de Jong OAM 9th Dan and his descendants. It is considered by them to be a shoulder lock.

Ude garami, as the above parties would suggest, is a joint-lock where forces are applied to move the shoulder joint towards or beyond the limits of its range of motion. 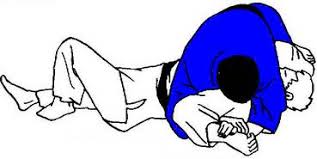 Ude garami is most often shown in judo as being applied when both parties are grappling on the ground (see right). Many (e.g., see Jigoro Kano, Kodokan Judo) explain that ude garami targets the elbow. This is why ude garami is allowed in judo competition because only kansetsu waza that target the elbow joint are permitted in judo.

Even though some distinguish between ude garami and gyaku ude garami in judo, more often then not the two techniques are referred to as ude garami. Should they be considered different techniques and not the latter a variation of the former if the anatomical consequences are different in both?

There are many more anomalies once you actually begin to study joint-locking/kansetsu waza techniques. Anomalies that throw up confusion and debate in martial arts circles but cannot be answered due to the lack of information and informed discussion.

I'm finally finalising my book on the science behind fighting techniques.

I provide a biomechancially based classification for all techniques that are designed to cause a person to fall to the ground. It's based on the biomechanics of balance and stability. A person is stable if their centre of gravity (CoG) is located over their base of support (BoS) and balanced if they possess control of their CoG with respect to their BoS.

Judo, according to Kano's classification of Judo techniques, does not teach takedowns.

A throw is a technique were forces are applied to cause both of the opponent's feet to leave the ground. The biomechancial target of the applied forces is the opponent's BoS.

A takedown is a techniques were forces are applied to cause an opponent's CoG to fall outside of their BoS and a balance recovery is prevented. Takedowns can be subclassified as 'one-legged' or 'two-legged' (for want of a better description) takedowns. The biomechancial target for one-legged takedowns is a person's foot in contact with a support surface. For instance, a foot sweep is a one-legged takedown.

Irimi-nage and Mukae-daoshi are good examples of the confusion held within the martial arts over this issue. Irimi-nage is 'entering throw' taught by aikido. 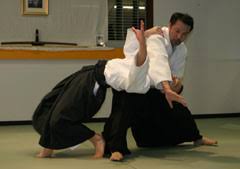 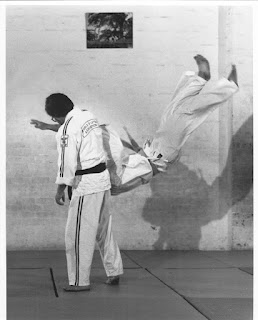 The irimi-nage/entering throw is in fact a takedown while the mukae-daoshi/meeting takdown is in fact a throw. What that also means is that the latter is entirely dependent on the momentum generated during the kuzushi phase of the technique.