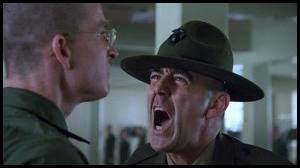 In one of the first scenes in Full Metal Jacket, Gunnery Sgt Hartman explains that he will be the marines drill instructor. One recruit, who Hartman nicknames Pvt Joker, makes a poor attempt at humour. When Joker picks himself up off the floor following Hartman's punch in the stomach, Hartman yells the following:

Hartman: Pvt. Joker, why did you join my beloved corp?

Hartman: So you're a killer?

Hartman: You got a war face? (He gives Joker an angry face and screams) Aaaaaaaaah! That's a war face. Now lemme see your war face.

Joker: (Grimaces as best he can and screams) Aaaaaah!

Joker: (Screaming even louder and with more grimacing) Aaaaaaaah!

Hartman: You don't scare me. Work on it!

Within the emotion discipline, emotion is considered to be a hypothetical construct denoting a process of a person's reaction to significant events which is comprised of several components: physiological arousal, motor expression, action tendencies, and subjective feelings. All of these components are highly interconnected.

There is evidence that trying to regulate or control one component of emotion may have immediate consequences for another component, illustrating the extreme interconnectedness of the components during emotion episodes.

Proprioception refers to the capacity of internal organs to provide sensory information about changes in the body. Proprioceptive feedback refers to changes in one internal system upon detection of changes in another system. One recent version of propreoceptive feedback notions is the so-called facial feedback hypothesis (FFH). FFH is the notion that inhibition or amplification of facial expression of emotion will modify the intensity and possibly the nature of subjective feeling.

In a widely discussed paper, Ekman, Levenson and Friesen reported evidence that the induction of particular motor expressions may not only amplify feeling state but actually create a specific emotion as indexed by differential physiological responses and verbal feeling reports without any other kind of stimulation. There was a tendency for the actors to feel the emotion whose facial signs they had unwittingly produced in their face.

Smile, and you will feel happy.

Is putting on a war face an attempt at managing the emotion - the interconnected physiological, subjective feeling, and action tendency responses - of the warfighter? By putting on a war face, is the warfighter attempting to combat the emotion of fear by replacing it with another emotion? If so, the action tendencies of flight, submission, tonic immobility (a conscious catatonic state), and flaccid immobility (unconsciousness) are avoided. These are avoided in part by the different physiological reactions which accompany different emotions.