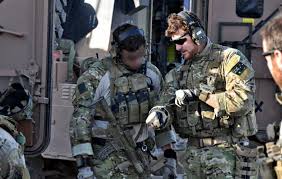 I initially refer to Petersen and Liaras' article concerning the emotional strategies used to overcome fear in war published in the Journal of Military Ethics. They provide five strategies that have been used since time immemorial to get people to fight rather than flee when threatened. The first mistake they make is to associate both fight and flight with fear, as do most people.

Walter Cannon developed the fight-or-flight concept and what most people who do not bother researching his work do is attribute both survival behaviours to fear when he attributed flight to fear but fight to anger. This small but important detail has important ramifications when attempting to understand natural and learned responses to a threat.

I then move on and use Cprl Ben Roberts-Smith's awarding of a VC for action in Afghanistan to extend far beyond Petersen and Liaras' work.

Robert's-Smith says anyone who is not fearful in combat is either crazy or lying. Fair enough. Given the most common instinctive response to a threat is fear and flight, how did Robert's-Smith overcome fear in order to take out the Taliban position that was threatening his platoon?

Moran, in The Anatomy of Courage, states courage is willpower. Courage is often stated, as evidenced in oh so many US military manuals, as engaging in action even though scared. General Sir Peter de la Billiere in the same book states that without fear there is no courage.

This produces an interesting dilemma. Medals of bravery by whatever description refer to courage or gallantry, and De La Billiere states that without fear there is no courage. If Robert's-Smith did not experience fear at the time of his actions then, by definition, he was not courageous.

I have this image in my head of, after an action, troops have to fill in a questionnaire with a question concerning their feelings during a particular engagement. 'You rushed an enemy position without regard for your personal safety in order to save your fellow soldiers.' 'Yes sir.' 'Were you fearful.' 'No sir.' 'Right, on your way. You're not brave. No medal for you.'

I've been trawling through news reports of Roberts-Smith's interviews. He talks about training kicking in. Stress training, even when the term itself is not used, is designed to minimise or negate fear and anxiety, although that is lost because of the reference to the ambiguous and abstract concept of stress (Everybody knows what stress is, but nobody really knows - Hans Selye, father of the stress concept). If his (stress/anti-fear training) kicked in, did he not experience fear when he rushed the Taliban?  His training overcame fear.

A most interesting discovery is a study that looked at extreme altruism of heroism medal winners. They found that an overwhelming majority acted on instinct and did not think about the action. The authors of that study wanted to see if acted without thinking or with conscious self-control to override fear. They, being members of the fractured sciences, did not follow through on that thought.


When I read the descriptions of the medal winners, many referred to adrenalin rushes and feeling no pain, both of which are physiological reactions associated with an emotion being experienced. What emotion? In fact, the authors defined intuitive action and decision making including emotion. What emotion?

They state that learning is part of our evolutionary heritage and that this extreme altruism can be an inherited trait or learned from life experience, or taught. It would be handy to know what emotion we are trying to teach and instill when training someone to 'have their mates' backs' in combat.